"They Drive by Night"

Sterling Truck from "They Drive by Night" 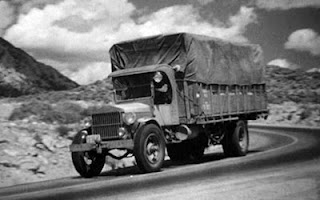 If you are a true fan of "Bogie" films, you might still have missed this classic truck film about the depression era. The story evolves around two brothers played by Humphrey Bogart and George Raft and also stars Anne Sheridan and Ida LaPino.

But of course, my favorite stars are the trucks, especially the truck pictured here in the opening scene. I'll have to admit that when I found this picture on the net, I had no idea as to the truck type. I suspected it was a Sterling from the late 1930's.

I had to rent the movie, and after several pauses, I did identify the marque from the radiator. It was indeed a Sterling.

This movie also has some great shots of other old trucks, including General Motors and an early cab over I still need to ID.

Another shot of the Sterling - taken by camera from my computer. 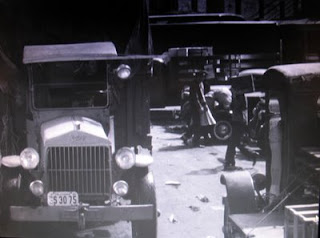 Posted by gdmurph at 5:23 PM No comments: