Has anyone noticed that I haven't posted about any truck shows this year? Nada, zilch!!! That's because the truck shows I usually attend were preempted by a 40th wedding anniversary and my 60th birthday.

That does not mean however that there were no truck showings -- this post is about one of those.

We were on our way to Cayuga Lake State Park for my 60th, and had just come into Watkins Glen when I spotted this GORGEOUS Mack LFT dump truck parked in a lot preparing to pick up a flatbed trailer. Of course this prompted an immediate stop by me and a camera. 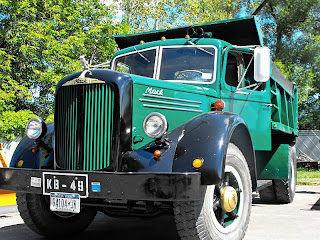 As I approached the fella that owns this truck I asked if he would mind if I took some pictures.  He was most kind and I handed him my "I'm Liking Trucks" card. That was when I found out he was on his way to the Endless Mountain Truck show the following day (one I would miss) and that he lived near-by. I got a location and his name -- Kenny Bubacz. I promised I would look him up. 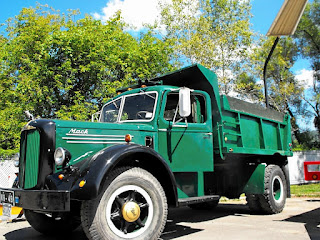 And so on the following Tuesday while out learning my bus route before school started, I found Kenny's abode and his collection. But more importantly I found a guy who loves trucks -- a kindred spirit. The Mack was parked in the driveway and Kenny was proud to share the details. He thinks he's had it for almost 20 years and he found it at The Endless Mountain Truck Show. It was an LFT that had once pulled trailers up and down from NY - Florida, and was then converted to a dump truck. It's original engine was a 510A which Ken said gave it a top speed of about 45. He swapped it out for a 707 with dual ignition -- now the truck will pull 70 all day long. 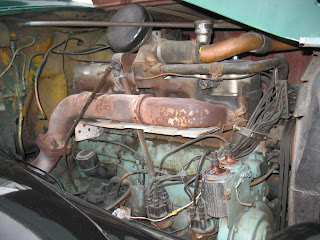 But what I like about this truck, as beautiful as it is, IT'S A WORKING TRUCK!!!! Ken still hauls gravel and dirt. You can't kill a Mack.

Oh, you remember I told you Kenny was picking up a flat bed trailer back in Watkins. That was so he could trailer this behind his 49 Mack -- 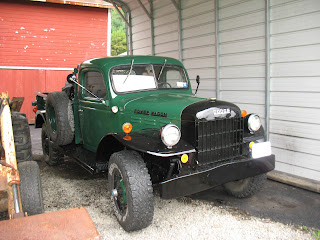 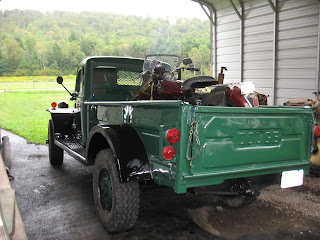 What's that in the back of the Power Wagon -- no less than a 38 all original Harley Hog -- but this is a truck blog!!!

INSIDE THE POWER WAGON-- 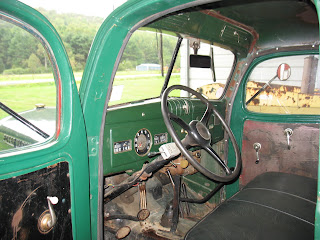 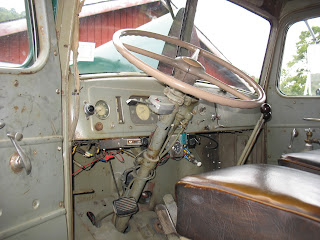 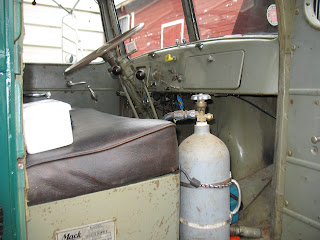 Now I'm faced with a dilemma --- sometime before next years Endless Mountain Truck Show, I have to decide which one of these I want to ride in to the show?  Hey Kenny, any chance I could drive???

I just received a note from Bill's friend Bruce that yesterday was Bill's 97th Birthday. So what better way to celebrate this mans life and contribution to the "world of trucks" than to take a look at what I believe represents the most complete collection of his Autocar Truck ads anywhere. Taken from LIFE, TIME, and BUSINESS WEEK, these ads appeared from 1943 - 48.

Here for you to enjoy --

Posted by gdmurph at 7:30 PM No comments: