PETERBILT AND THE MAGNIFICENT "MIGHTY MITES" and a PIECE OF PIE

As usual I have been spending a lot of time over on HANK'S TRUCK PICTURE FORUM, and recently the subject of the PETERBILT MIGHTY MITES came up in a thread started by my buddy Jerry called "FOR PETES' SAKE" (VINTAGE PETERBILT APPRECIATION) .

So now I hear you asking yourself (while others may already know), "WHAT IS A PETERBILT MIGHTY MITE?"

Seems back around 1946 PIE (PACIFIC INTERMOUNTAIN EXPRESS) came up with an idea to highlight PETERBILT as this was their dominant truck at the time, and at the same time promote PIE throughout the trucking industry. So, in 1947 PIE constructed a 1/2 scale operational truck in their SALT LAKE CITY shop that was to become the first MIGHTY MITE.

Here is a picture of that truck beside the real truck it was patterned after, a model 344. It made its' first appearance August 2, 1947 at the opening of PIE's Denver Terminal. 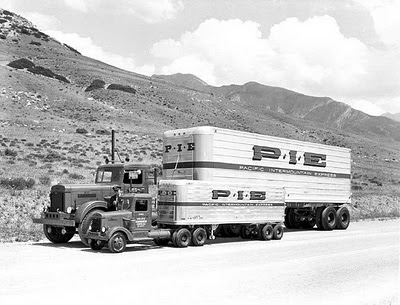 This 1/2 scale truck was used by PIE to promote truck safety and the PIE trucking enterprise. After touring the country, this truck was put up for sale. Fortunately, there were no buyers, and PIE decided to give the old 47 a little face lift to make it a model 350 cab-over with a dromedary unit. Most of the conversion work was now done by Peterbilt, this included the lengthening of the 47's chassis and building of the cab. Note the drom unit and short cab in the picture below. 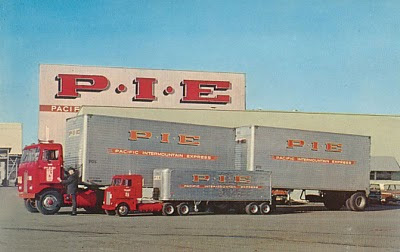 By 1965, PIE was once again in need of a replacement for the Bubblenose PETE. Again Peterbilt made a model 282 COE in 1/2 scale to fit the bill, shown here beside its big brother. 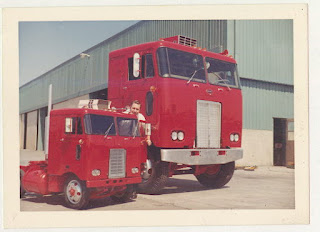 Of course, it would be very sad indeed if these "one of a kind" trucks did not survive. Where are they now?
For that information, and more pictures, you'll have to visit HANK'S, specifically the  MIGHTY MITE thread
to see how some wonderful people have provided the answers.
Posted by gdmurph at 9:59 AM 13 comments: