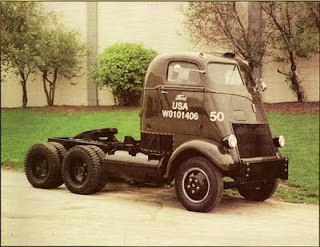 This is perhaps one of the rarest examples of Ford ingenuity in existence today -- for a fact it is the only one. Here is it's story quoted from another web page.


"As the fires of war engulfed much of the globe in the mid-to-late thirties, the free world that still existed turned to the United States for help. American factories began to reap the profits from that foreign war. As the firestorms of war engulfed more and more of the globe, it became evident to many in the U.S. that we must prepare to defend our way of life. The problem was that all of the possible aircraft plants in the U.S. had contracted all of the production that they could possibly handle to the British and others.

It was at this point that the federal government turned to Henry Ford with the question, "Can you build aircraft (bombers) the same way as you have built cars?" Mr. Ford replied, "I suppose, Let’s take a look," At this point Mr. Ford along with a group of company officials went to San Diego, California to look at Consolidated Aircraft’s B-24 Bomber assembly line and designs. From this visit and others the famous Willow Run plant and its production came into being. The main point with which we are concerned is that Lloyd Lawson of the E &L Transport Company was in the group to look into providing transportation of the components which would be produced at Willow Run Ill. The components of the bombers would be shipped to San Diego Ca., Fort Worth, Texas, and Oklahoma City Okla. where plant space was available.

Lloyd Lawson returned to E&L Transport Company in Dearborn, Michigan. The company designed the twin engine Ford truck tractors, using 2-100 horse powered Ford truck engines driving 4-speed Warner transmissions and Timken differentials. Each engine had it's own, ignition switch, gauges, radiator, Transmission drive shaft and rear end. This was basically two-one and a half ton trucks in one chassis using standard off-the-shelf cabover engine Ford truck parts. Some parts were modified, but all were Ford. The drawing board and blue prints consisted of the plans being drawn on the concrete floor with soap stone. The engineers consisted of the men working in the shop. The total production number of these vehicles was 96 to 98. About one half of these vehicles had the rounded cab as does #50. The other trucks were designed with the more square cab." "According to the caption for this June 17, 1942, photo, this is simply a “Ford truck to haul bomber parts,” but our friend Fred Crismon, author of “U.S. Military Wheeled Vehicles,” has more:

Early in 1943 [which clashes with the date of the above photo -ed.] this highly specialized vehicle was shown to the public, identified as a tractor designed to pull a 60-foot-long “supertrailer” in which 34 complete tail cone assemblies could be carried. The tail cones were for the B-24 bomber of which Ford was one of several builders. The assemblies were carried between several manufacturing plants according to contemporary sources, involveing runs between California and Texas, Willow Run, Michigan, and Tulsa, Oklahoma, and Fort Worth, Texas, and between Loudonville, Ohio, and Buffalo, New York. Two Mercury V-8s were used, driving into synchronized transmissions.

Crismon also noted that the tractor was rated at 10 tons and that the trailer was loaded from the top by overhead cranes. About 70 of the trucks were built, and the twin engines were accessed by pulling them as a unit out the front of the tractor. Crismon provides evidence that, although Ford was often mentioned as the builder of the trucks, a company named Thorco Dual Motors built them – Thorco being a trademark for the Thornton Acle Company. However, James Wagner, the author of “Ford Trucks Since 1905,” wrote that about 100 tractors were built by E and L Transport of Dearborn, and the corresponding trailers were built by Mechanical Handling Systems."