OK, I hear some of you asking what does LRDG and 30cwt stand for. This post is due to a book that was recommended on Straightstack ( see my side bar) . The book is called "Killing Rommel" by Steven Pressfield. It is a novel about the British "special unit" known as the Long Range Dessert Group or LRDG. Their objective was to go after Rommel, to kill or capture him during the North African Campaign of WWII. The book is based on the memoir of R. Lawrence Chapman, who fought with this group.

Early in this groups existence, they used Ford trucks. But after 1941, they switched to, and preferred the Chevrolet 1 1/2 ton (or 30cwt). This was a Canadian built Chevrolet supplied without the cab and modified for dessert war fare.

As my friend on Straightstack pointed out, imagine driving one of these in sand and when temperatures during the day were over 110 F. My hats off to those that did. 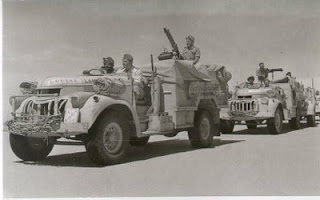