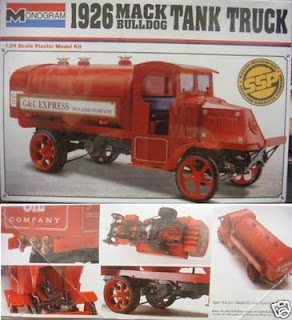 "Perhaps the most well known name in the annals of trucking history is the MACK model AC - or "Bulldog", as it became known by the American soldiers in World War I. Production of the famous Bulldog, with it's characteristic hood shape, was started in 1915 and continued through 1935. It served proudly and well in every conceivable function where a truck could be used. The term "BUILT LIKE A MACK TRUCK" became a popular phrase to describe anything solid and dependable."

Recently MONOGRAM re-released one of their MACK kits, the MACK AC TANK TRUCK --- shown above. Originally produced with TEXACO markings, this kit has two options -- the one shown on the box, and the one my build. 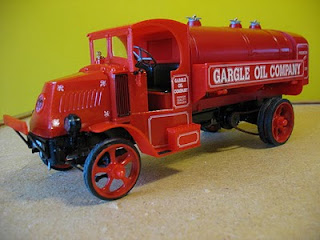 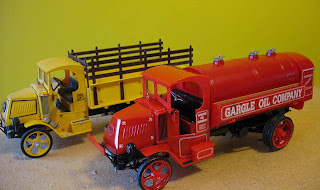 If you build this kit be careful to follow instructions by steps!! Pay close attention to frame build up that you square the ends of all cross-members so they fit against the chassis rails. Also make sure the rear engine cross-member support is mounted properly.

This was a fun build that I would do again.  The red tank was painted, but the rest of the truck was not --- I would suggest painting cab, hood, and tank all red.
Posted by gdmurph at 11:59 AM 4 comments: