My cousin recently sent me a box of letters containing some that had been written between my grandmother and my mother around the time of my birth, some letters referred to some trucks we had while I grew up on the farm.

I was born in 1952, the third and youngest of my parents sons. My parents were farmers back then, running a dairy farm on 200 + acres.

Of course we had trucks - and that is what these posts are supposed to be about. So here, are some of the trucks I remember, and a truck my brother remembers from before my birth.

My parents bought our farm in the late 40's. Their first farm truck was a Ford F-1. 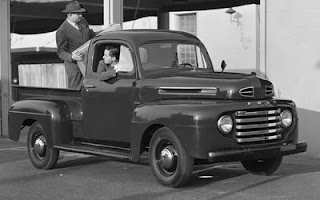 I hope my brother checks this out to verify his remembrance. The first truck I remember, bought either just before I was born, or that year, was a grey Willy's Jeep pickup - for some time we kept the Willy's brush gaurd, probably still on the old farm. 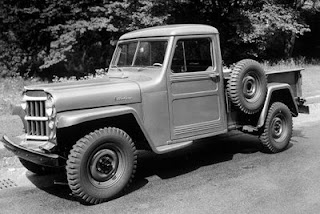 I can remember - barely - riding in this as a very young child. Our next truck was an orange International pickup, bought around 1956. I don't think my dad liked it because it lacked 4WD. 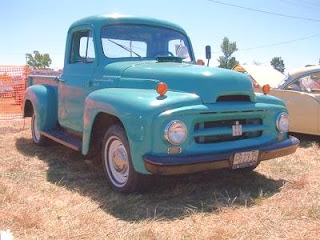 The next vehicle we had didn't stay very long - I saw it as an interim and don't know to this day if we bought it or borrowed it. It was a GMC Panel Van . 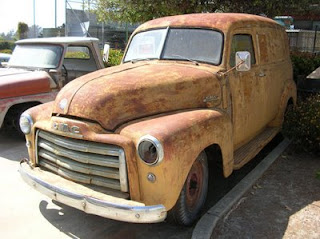 I remember it was a "hot" ride in the summer time - maybe that's why we got rid of it in late 1957. The truck we had just befor my sister was born in 1958 was a white over blue Willy's Jeep
FC-170 with a stake body. I have written in a past blog about this truck - my dad had 4WD again, and it was my favorite truck.

The Jeep lasted till about 1963. We then purchased a Ford Econoline Van - it took us to Oklahoma and back again. The van was a six cyliner window van with removable seats so my dad could haul his tools. My mom drove this a few times, once loosing control on ice and putting it into a ditch - she suffered a bronken arm. 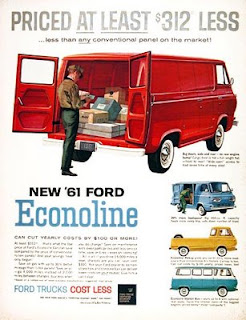 The last truck we had before I went away was a 68 Dodge Sportsman. It was also a straight six and a window van. I dated my wife in this van when my mother wouldn't give up the dodge Dart.
When my dad died, my brother got this and drove it for some time. 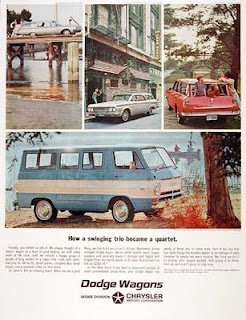