Half Tracks or Half Trucks and other Military Vehicles

It is hard to keep track of time and the fact that it has been a while since I last posted. I have been spending my time at Hank's Truck forum (see side bar), mostly on what is called "Jerry's Nostalgia Page" , specifically on two recent posts concerning HALF TRACK vehicles and the other military vehicles (trucks).

The first thread about HALF TRACKS is called "THE HALF TRACK: trucks with treads", and now contains 16 pages devoted to the HALF TRACK'S of WWI, WWII, the Korean War, and Viet Nam.

It was started on a whim, when I asked Jerry if Half tracks were considered to be trucks after looking over my truck collection and doing a "comparison count". I'm glad he replied in the affirmative and the following pictures were added to the numerous posts on the subject ---- 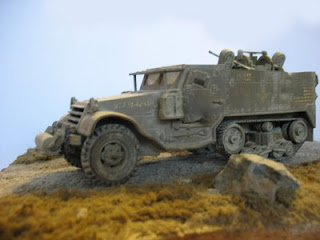 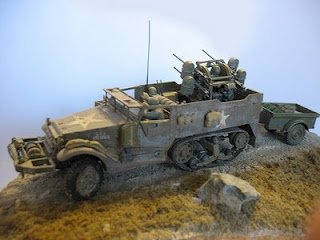 That first model was built by me over twenty years ago, an old Monogram kit. The second is a Tamiya kit that was built completly by my daughter prior to my build. She was about 12 at the time, and would NOT allow me near it until it was done!!

"Our" second thread on Hank's is titled, "GEARS, GUTS and GLORY:Vintage Military Trucks". This thread is now 77 pages long and is devoted to Military Vehicles of all wars from WWI to present, and includes vehicles of all nations. It is still a work in progress that includes vehicle pictures and links to pages covering Vehicle types.

This is only a taste of what my "comrades", Jerry, Leo, Vern, and Mike have posted. The above threads are worth a visit --- YOU are always welcome to join in the passion for old trucks!!!
Posted by gdmurph at 9:39 AM No comments: