Not only is the evidence in, but the case of "MIGHTY JOE YOUNG" vs. "IMAPACT" , and what seems to be the same vehicle, now identified as a 1944 WHITE 810T is over. The jury has deliberated on the evidence based on a series of stills from both movies.

The VERDICT: While said vehicle, one 1944 WHITE 810T did try to disguise itself in the movie "MIGHTY JOE YOUNG" as a moving van for the company "GREAT WESTERN MOVING CO." and apparently also did the same in the movie "IMPACT" as a "BEKIN'S" moving van, the van appearing in both 1949 movies is one and the same.

What was most dificult about this identification was identifying the year and make of said vehicle
as a 1944 White.

Presented to the case was some new evidence in way of a 1945 advertisement for a White Delivery Van: 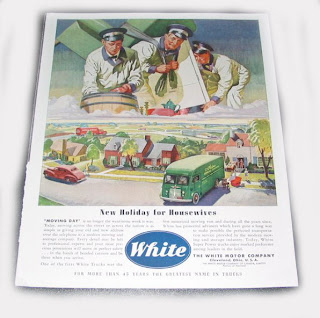 You can note the similarity both to the Bekins and Great Western Vans below: 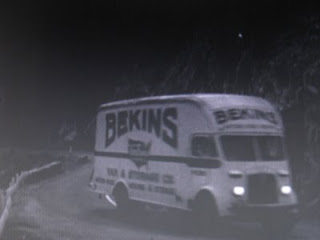 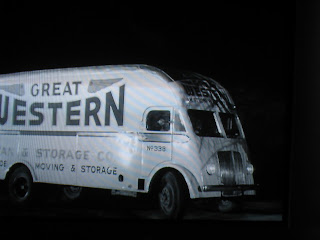 Since the advertisement shows a 45 van that uses a latter style grill, it is assumed that "our"
two /one and the same van is a late model 44 WHITE 810T.

Mr. Murphey.
I have some additional information for you in regards to identifying your "MIGHTY JOE YOUNG" truck. I believe the truck is a White Model 805, Cab Over Engine Chassis, vintage 1936 to 1940 with a Gerstenslager Co. of Wooster Ohio moving van body. Let me explain why I believe this to be the case.
When White chassis were used by body builders to build trucks where the entire body including the driving compartment was provided by the body builder (such as moving vans of this type) the only external means of identification of the chassis builder was usually the radiator grille and possibly some trim pieces. Gerstenslager followed this procedure when they built the "MIGHTY JOE YOUNG" moving van. The White 800 Series/Gerstenslager moving vans were built from 1936 to 1940 using the COE radiator grille and accompanying trim. In 1941 the 800 Series imodel dentification was changed to the WA Series. Most of the changes were to the power train and chassis but the radiator grille and accompanying trim was changed to distinguish the new WA's from the 800"s. The new grille and trim included a wider center strip, two circular ID badges and a pair of wings sprouting from the center strip. I have attached two photographs of White/Gerstenslager Moving Vans. The Allied Van Lines unit is an 800 Series Model 805 (1936 to 1940). The Dilner Storage unit is the WA Series Model WA-122 (1941 to 1948). As you will see the "MIGHTY JOE YOUNG" truck is an 800.series. Also notice that the truck in the White advertisement on your BLOG shows the distinctive wings making it a WA Series.
I hope this information is helpful. If you have questions feel free to E-Mail me at any time.
Happy Trails.
Don MacKenzie. 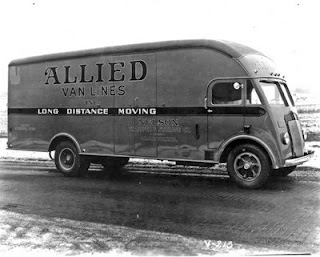 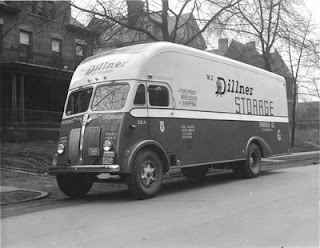 Mighty fine pictures Don, my sincere thanks for the info too!! Thanks for shedding some light on this VERY INTERESTING TRUCK!!!


For more information on "GERSTENSLAGER CO." check out this web page -- great photos too!!