Signs Of The Time -- Two Vintage Truck Signs -- No More

Once again I owe a debt of gratitude to my friend Jerry, for in part he is responsible for finding one of the signs that will be a subject of this post.

Once upon a time in NYC there was a truly magnificent sign that adorned two sides of a building located on 125th street and Broadway. The sign was one of those hand painted billboards and advertised the Chelsea Warehouse Moving and Storage Company. It is my guess that this bilboard went up in the 50's, but sadly it was painted over in the late 80's. It was a landmark that could be seen from the elevated line that ran near by, that is how Jerry found the original picture on the NYC transit board. Below a picture I found on FLIKR of that sign -- sadly now gone ---- 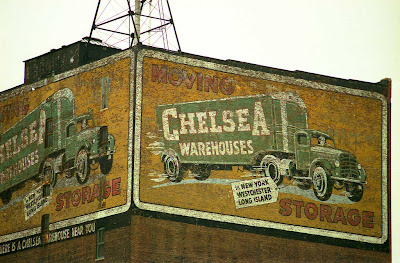 And here, cropped from a picture taken from the el that Jerry found -- 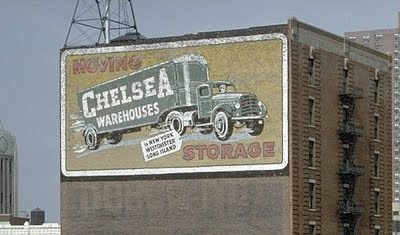 Well of course this find started something between Jerry and me, and during a phone conversation I remembered another NYC sign that I had seen back in 2000 when taking our daughter Morgan to school at NYU. This sign like the aforementioned was also erected in the 1950's by the YALE TRANSPORT CORP. of NYC and was located on 12th ave. and 40th street. When first erected the cab of this mock truck was done as a WHITE tractor -- note the mock driver seen through the drivers window. The next series of pictures show the same sign as it appeared in the 80's with a modified tractor that appears to me as a Peterbilt. The sign still uses the YALE logo, but is now red, white, and blue --

After years of neglect, the sign was purchased in the early 2000's and restored by United Rental ( this was how I saw it). It was painted in United Rental colors and remained that way until it was torn down along with the buildings in 2010 -- I am hoping that United Rental had the foresight to save the sign after putting all that effort into its' restoration.

I would love to hear your memories of these two signs -- drop a comment or send an email!!!